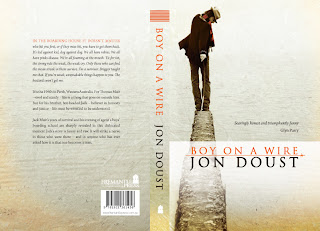 The cover of Boy on a Wire.
Everything is coming together, as it does, in a well organised, sort of chaotic manner. The manuscript is with the printer, in Guatemala, Botswana, or China, or wherever it is taking place, the pumping of the words into the little format so desired by book readers.
We live in a global economy.
The book will be printed on another planet, then shipped back to ours, then re-shipped because there is a demand for it in all English speaking enclaves.
I guess.
I hope.
Eventually it will be translated into 47 languages, some of them near dead because of the rampant colonisation of languages by the majors: English, French, Spanish, Mandarin.
Have I strayed?
Have I left behind the sole purpose of this blog, to further the sales and the income of this blogger?
Arrr, what it is to live inside the head that wanders.
Posted by Jon Doust at 11:30 No comments: